The history of plague masks in East Asia / A conversation between Christos Lynteris, Tomohisa Sumida, and Meng Zhang 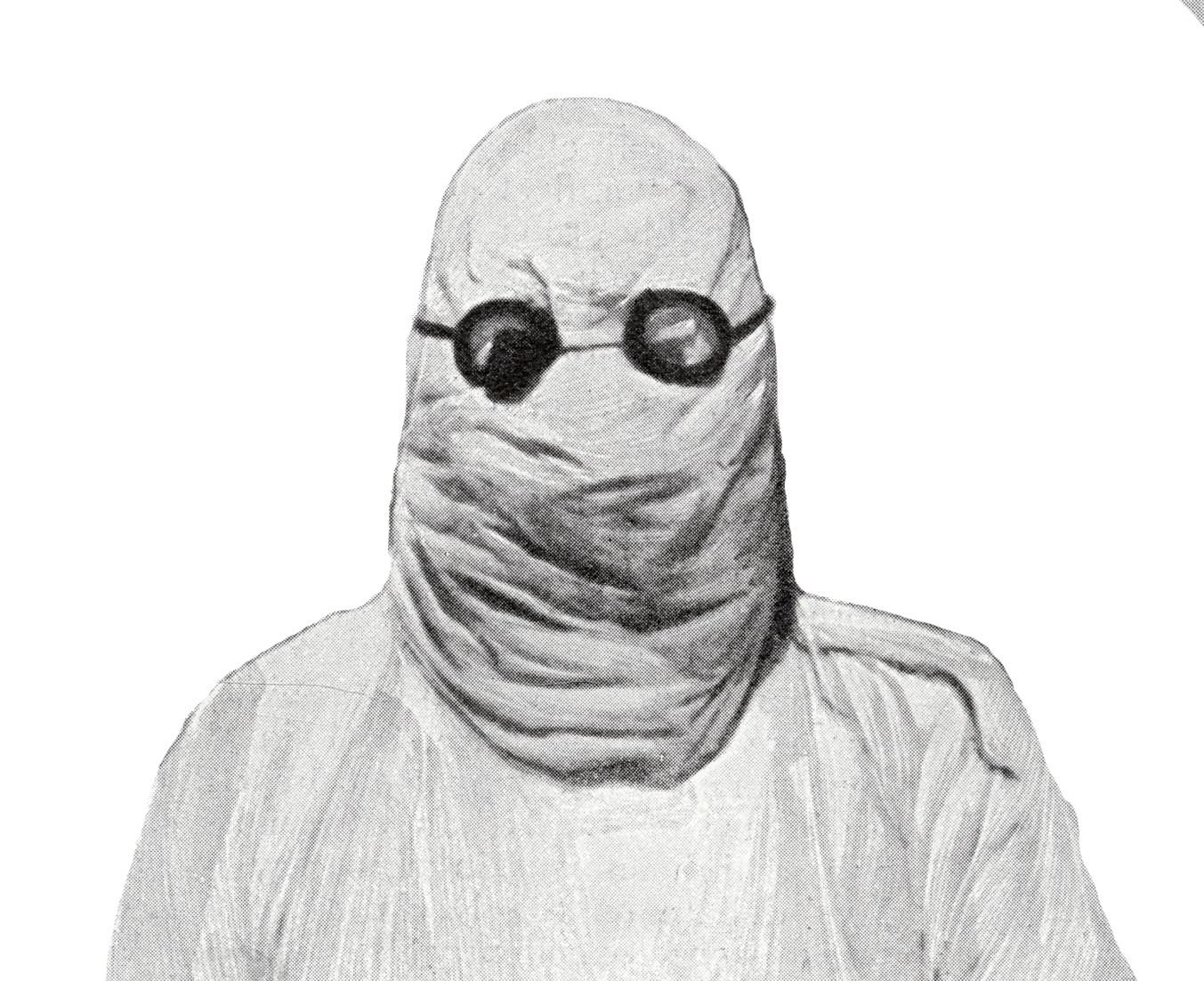 As masks began attracting increased attention in 2020, historians of science and anthropologists began independently investigating the situated histories of this iconic artifact. Christos Lynteris’ work on plague masks has inspired Tomohisa Sumida and Meng Zhang to trace the history of masks in Japan and China, respectively. In a conversation between these three scholars, they discuss their research on the history of plague masks in East Asia.

Tomo: When I first started writing on the history of masks for the Japanese journal Gendai Shisō [Contemporary Thought], I read several articles by Christos. In his latest article, published by the New York Times in February 2020, he wrote: “[a]nti-epidemic masks as we know them today were invented in China more than a century ago, during the Chinese state’s first effort to contain an epidemic by biomedical means.”1 So, I wrote in Gendai Shisō, “the use of masks by medical personnel for the purpose of disease prevention began with the Manchurian plague in 1910–1912.”2 After its publication, several Chinese scholars, including Meng, made me realize that I was mistaken. Wu Liande, a Cambridge-educated doctor and the inventor of the so-called “Wu’s mask” during the Manchurian plague, himself mentioned masks that preceded his, in places such as Germany and Japan.3 Christos’ research article in Medical Anthropology had been more carefully written.4 In Japan, doctors and quarantine officers had already begun to wear masks during the plague epidemic in Osaka in 1899–1900, especially after two doctors and one quarantine officer died from the pneumonic plague in January 1900 (Figure 1).5 Christos, do you know of any other cases of early plague masks? 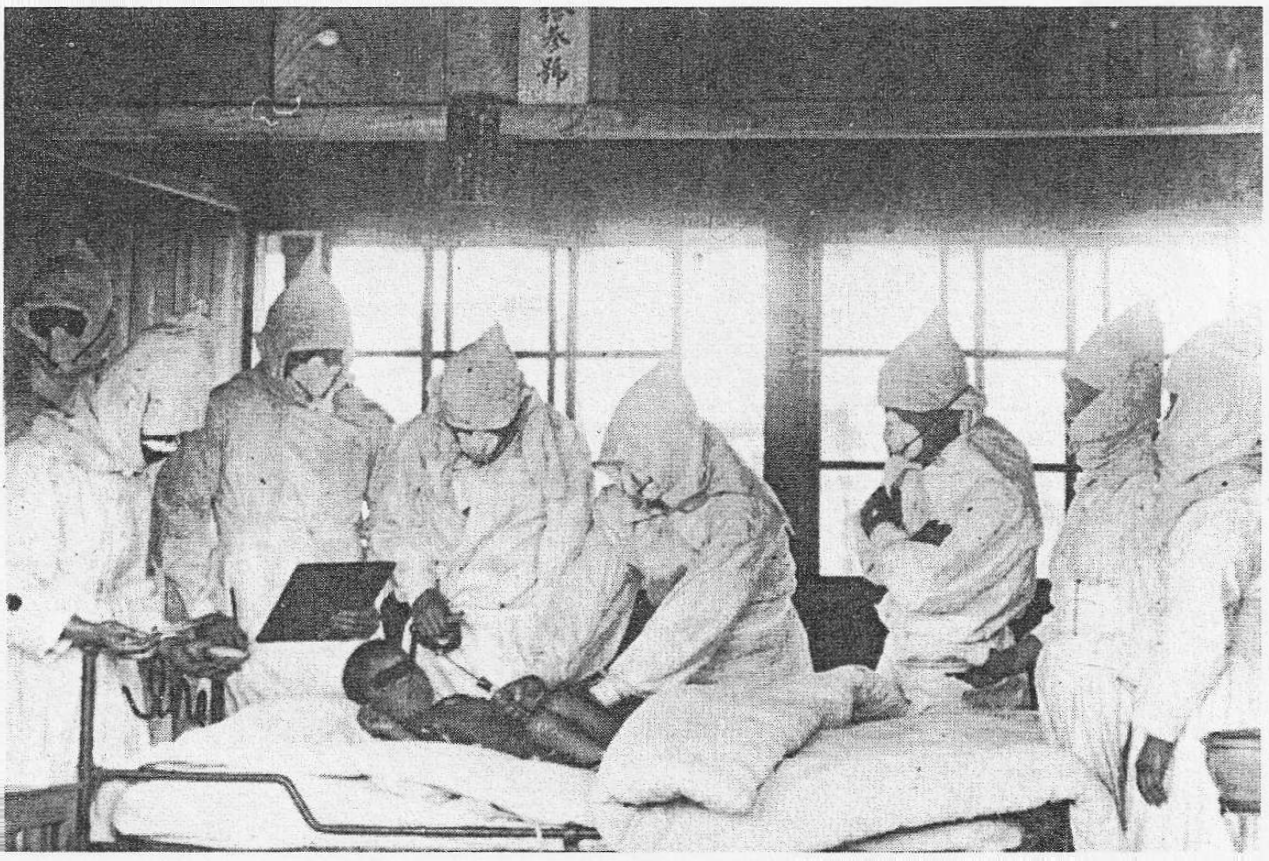 Christos: This is a difficult question, as it depends on what we mean by “plague masks.” The image that comes to mind immediately is that of the “Beaked Doctor.” These early modern physicians wore masks when examining plague patients, which were meant to protect them from miasma. We know from oil paintings that people burying plague corpses in Marseille in 1721 wore cloths around their mouth and nose. Similarly, following the Vetlianka plague epidemic in Russia in the late 1870s, doctors published designs of hazmat-like anti-plague uniforms involving complex respirators. But all these cases were meant to protect doctors from a plague imagined as miasma, or “bad air.” What we see, by contrast, in the course of the third pandemic, already by 1900, is the use of face-covering devices against bacteria. So there is a material continuity in place on the one hand, and an ontological, symbolic and epistemic discontinuity on the other, making it crucial to study their interplay and its material, aesthetic, social and behavioral impact on the ground. What is important is not so much to locate the first “mask” used against disease, but rather to discuss how ideas, practices, and imaginations of face-covering devices emerged in different social and epistemic contexts. This can lead us to think about the ways they started to materialize as “masks” in the strict sense of the term.

Tomo: In Japan, the “Jeffreys’ respirators” which had been invented in London in 1836 were popular among urbanites in Tokyo at least in the 1870s and succeeding decades (Figure 2). I suspect that people accepted masks as the tools of modernization and Westernization. How can we further understand such folk usage of masks? 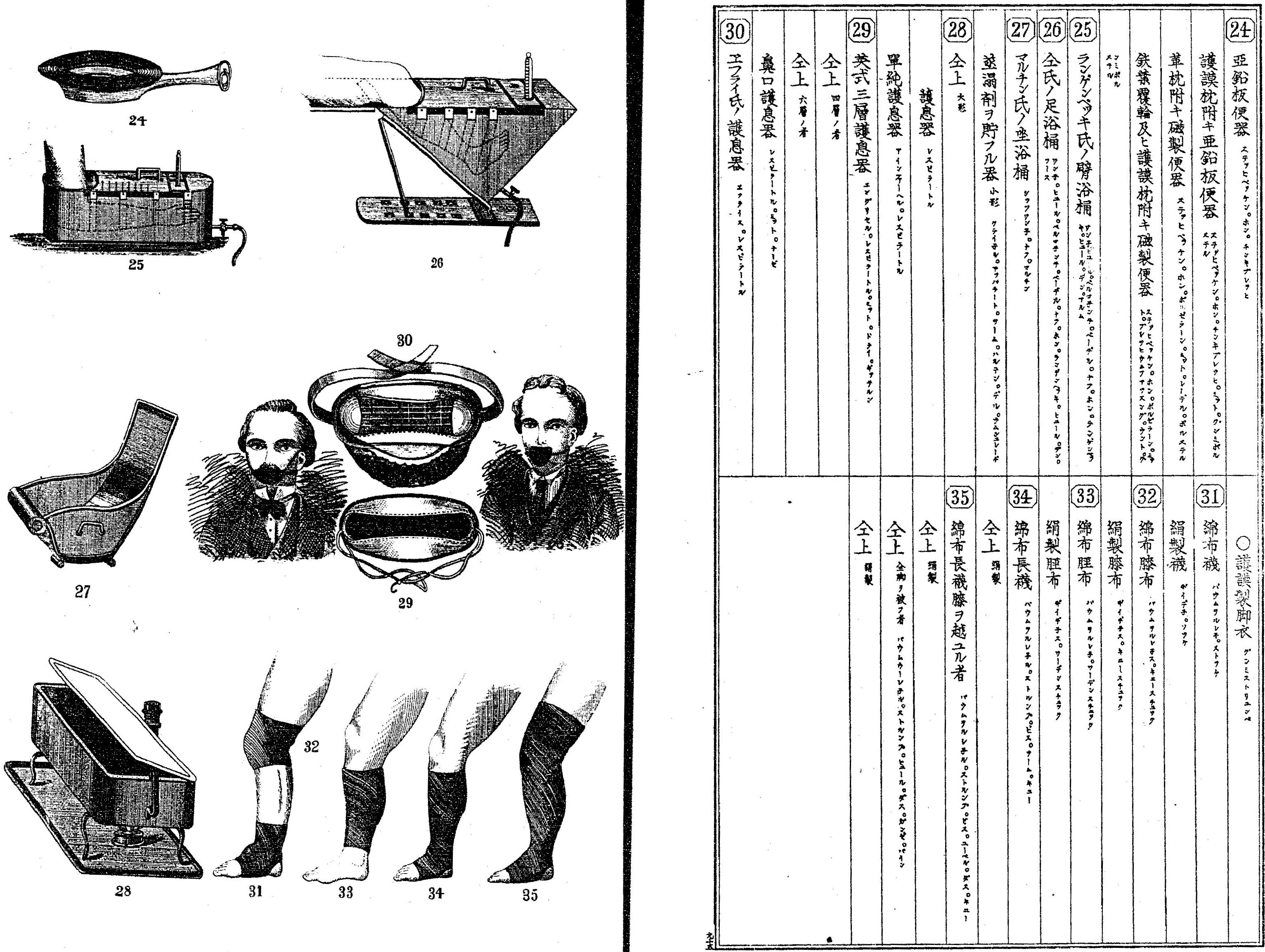 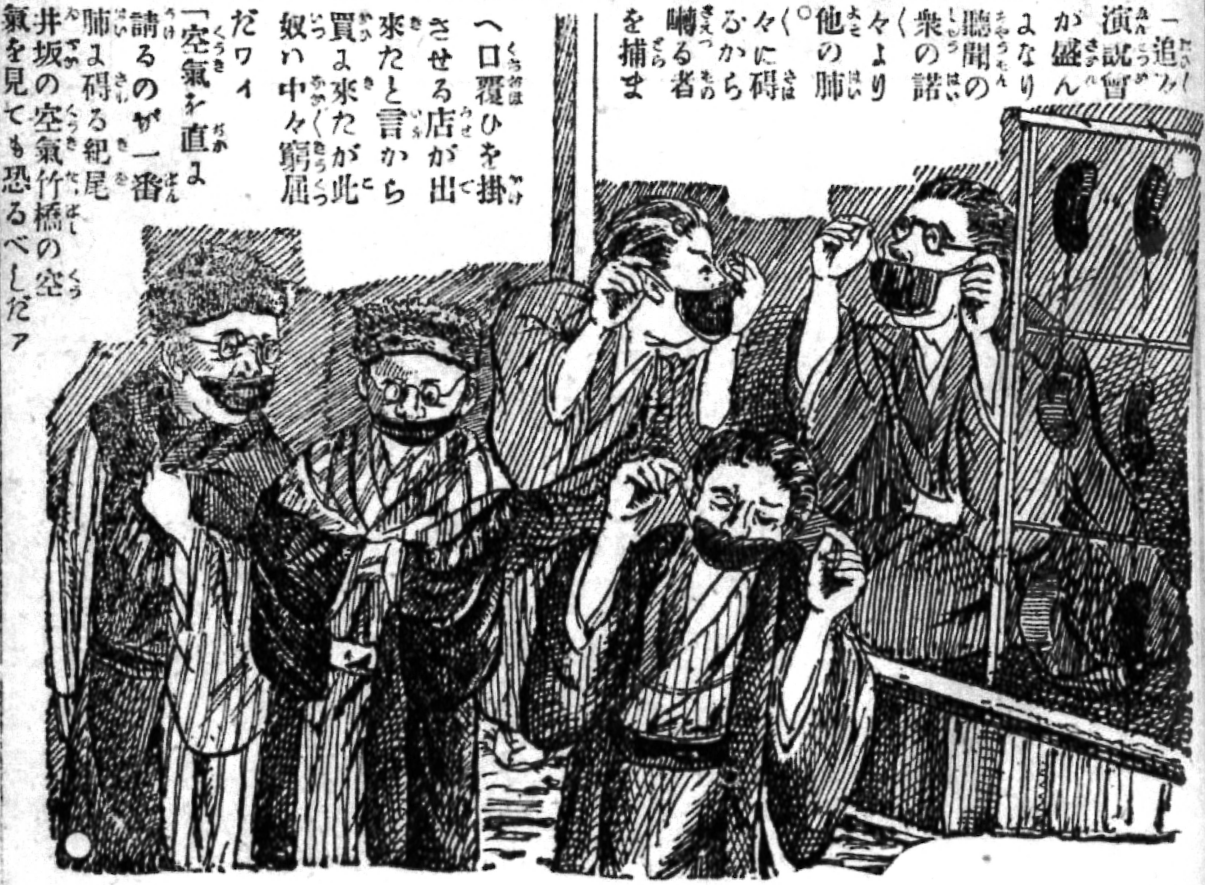 Meng: Although there is no direct evidence of the common use of respirators in China in the nineteenth century, quite a few English-Chinese dictionaries compiled by medical missionaries from the 1860s clearly introduced respirators to Chinese learners by translating them as huxiqi (literally: breathing apparatus).6 It can thus be assumed that respirators were introduced in some missionary hospitals in China, just like in England and America. In this Chinese context, before 1911 respirators were mainly used for medical purposes. It was in the Manchurian Plague that respirators were massively worn by both medical professionals and civilians.

Christos: We know that then, just as now, people adopted epidemic control technologies by adapting devices to their own cultural and epistemic contexts and political agendas. In reality, all uses of anti-epidemic masks, back in 1910 and today, involve degrees of vernacular reappropriation, signification, and valorization. PPEs are not simply material items, but also symbolic and performative objects. In many ways, it is their symbolic and performative efficacies that are more important in driving the social use of these devices.

Meng: It needs to be emphasized that there was a long-lasting tension between medical experts and Chinese layman, who were not necessarily fans of masks or other plague-prevention interventions. Given this public conflict around anti-plague measures, Wu Liande and his Western colleagues concluded that, without strong political support, mass-masking would not be possible, especially among less educated populations. Dr. Richard Strong, an American medical scientist working in Manila, had later proven that anti-plague gauze masks were not “bacteria-proof,” thereby justifying the suspicion voiced by Chinese locals that gauze masks could not prevent the deadly disease, even though physicians in China had not cast any doubt on gauze masks for many years.

Tomo: In Japan, there had been “fans of masks” even before the plague. During the Osaka plague in 1899–1900, advertisements for the respirators as “plague prevention” apparatuses appeared in the press before the official recommendation came out. That may be why I have not been able to identify the early promoters of anti-plague masks. So, I would like to ask both of you to comment on the importance of Wu’s intervention.

Christos: What Wu achieved in 1910–11 was not the invention of the anti-plague mask per se, but the transformation of this face-covering device into a global charismatic epidemic control object, one that attracted media attention, and in this way gained symbolic and epistemic value beyond its immediate context and use. Wu’s success, as I have argued, was to transfigure a face-covering device into a mask, in the proper anthropological sense of the term: into a transformative device. This transformation also depended upon rendering this device into a visual object – something achieved through the application of photography on the ground, including self-portraits of Wu. We also need to remember that Wu continued developing and applying the mask to epidemics in China for many years. In the course of the second Manchurian plague epidemic of 1920–21, for example, Wu oversaw the production and distribution of 60,000 masks to the general population.

Meng: Before coming to China in the 1900s, Wu Liande studied the so-called tropical diseases, such as plague and malaria in Britain, Germany, and colonial Malaysia. We can suspect that he was familiar with the most recent developments in bacteriology, including the use of respirators to prevent contagion. At that time, bacteriologists and tropical medicine professionals focused mostly on vaccines and disease treatments. The effectiveness of masks for preventing contagion was evident to them and was treated as an obvious fact of everyday work rather than an innovation. As the medical chief of Harbin, Wu Liande seemed more interested in the etiology of the pneumonic plague rather than its prevention in the form of something as simple as a gauze mask. Moreover, before Wu’s album Views of Harbin (1911) was published at the end of the plague, in April 1911, global media had already extensively reported on the phenomenon of mass mask-wearing in Manchuria (Figure 3). So, we can hardly say Wu Liande had a direct impact on the international perception of anti-plague masks during the Manchurian plague. 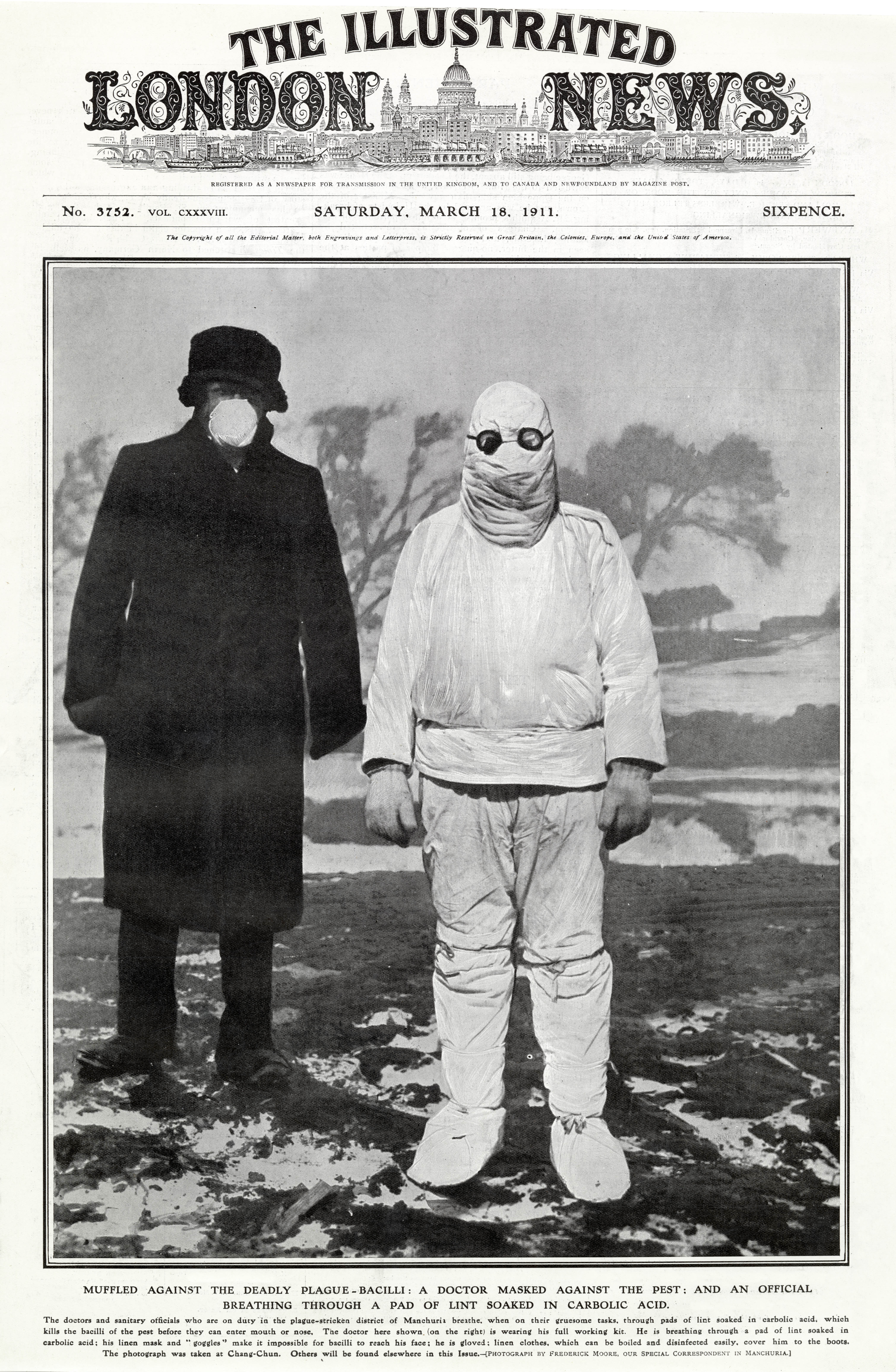 Figure 3. The Manchurian Plague in the British news. (“Muffled Against the Deadly Plague-Bacilli,” The Illustrated London News, March 18, 1911, page 1.)

The only recorded experiment on the efficacy of masks during the Manchurian plague was conducted by a Japanese physician who was a student of Kitasato Shibasaburō, known for discovering the plague bacillus. It was not until the early 1920s that Wu Liande started to test gauze masks, probably because he finally realized that the vaccines against the plague, that many renowned medical scientists had worked on for decades, were an unrealistic dream which might never come true.

Christos: Whereas Wu’s album was indeed made available in April 1911, his masks were pictured across international news items on the Manchurian plague epidemic through January, February, and March of 1911. Whereas these did not always attribute the mask to Wu, they became a powerful way to advertise the anti-contagion efficacy of the device and render it into a globally recognizable method of epidemic control. Other masks of Japanese or French design were also represented in these publications as well as in scientific ones, so I agree that it is very important to recognize that the emergence of the anti-plague mask as a global visual object depended not simply on Wu’s efforts, but on an international race for the best mask. The manner in which the international press often paid no attention to realities on the ground and created visual meta-narratives about these devices, which, often by way of comparison to the beaked plague doctor, configured them into icons of medical modernity.

Christos Lynteris is a Senior Lecturer in Social Anthropology at the University of St Andrews. His research focuses on zoonotic diseases, epidemiological epistemology and colonial medicine. The author of four monographs and editor of five edited volumes, he is the PI of the Wellcome-funded project The Global War Against the Rat and the Epistemic Emergence of Zoonosis and was the PI of the ERC-funded project Visual Representations of the Third Plague Pandemic.

Tomohisa Sumida (住田 朋久) graduated from the University of Tokyo with a Master’s degree in the History of Science and is currently working for a Japanese public think tank. His work explores the social dimension of science as it relates to topics such as nature conservation, air pollution, and pollen allergies. In his paper “Covering Only the Nose and Mouth: Towards a History and Anthropology of Masks”, published in the journal Gendai Shisō [Contemporary Thought] in April 2020, the mask is at the center of inquiry.

Meng Zhang (张蒙) earned his PhD in Chinese History from Peking University, China. He is currently a postdoctoral fellow at the School of Health Humanities, Peking University on the research project “Herbal Medicine and Japanese Pharmaceutical Study in Modern China, 1905–45”. He started to look into the history of masks in China and East Asia at the beginning of the Pandemic and published an article titled “From Respirator to Wu’s Mask: The Transition of Personal Protective Equipment in the Manchurian Plague” which examines the knowledge production and circulation of plague masks in 1910/1911 China.