Thinly-masked: What the Japanese can tell us about facing uncertainty / by Jadie Iijima 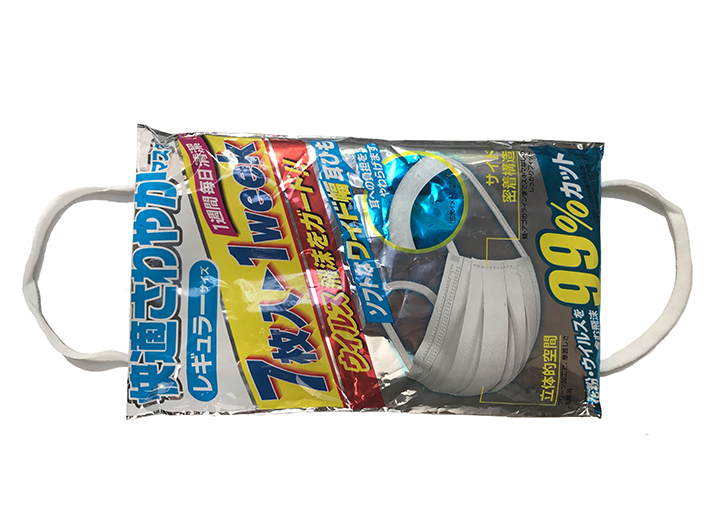 When it came to pandemic-preparedness, you could say I was one of the lucky ones. As others scrambled to source the necessary protective equipment (how many of us had even heard of an N95 or FFP2 respirator before all of this?), I just needed to reach into my suitcase to find an unopened pack of surgical masks. These will, as the bright pink bubble letters assure me, not only protect me against pollen and PM2.5 air pollution, but keep my throat hydrated and skin moisturized as well—“perfect for the dry winter months!”

Later that day, my mother phoned with a frantic offer: she wanted to send me a few more, since, as she put it, “do they even have masks in Germany?” She didn’t relax until I told her that I’d brought enough with me from Japan to last the lockdown, but makes a point of reminding me every now and again that her offer still stands, should I happen to change my mind. Her insistence, however absurd it may seem, reflects her deep reliance on masks that was, in part, reproduced in my own nagging need to maintain a small reserve of them “just in case”—although “just in case” of what, I can’t quite say.

Some might call it the Japanese obsession with hygiene, applauding the diligence of a well-informed mask-wearing population. Others may cite population density or a culture too considerate to do things any differently, given this convenient tool for wordless communication. Whatever the diagnosis, the message delivered by Western media outlets has always been clear: the Japanese wear medical masks in non-medical settings, and while the rest of us can speculate about the reasons behind this choice, we’ll never be able to understand or relate to it.

The truth of the matter is as layered as the mask itself: while none of these individual interpretations are wrong per se, it’s impossible to deny that the aggregate of these concerns has grown into something greater than the sum of its parts. Today, the mask has been elevated to have symbolic meaning far greater than could be provided by any one of its particular uses. Sociologist Horii Mitsutoshi, author of マスクと日本人 (Masks and the Japanese), has coined the term “risk ritual” to describe this exact phenomenon.1 He characterizes the usage of masks as a protective reaction triggered by an amalgam of ambiguous and often invisible threats and uncertainties, over which the mask wearer attempts to gain a sense of control.

His choice of the word “ritual”—a word entirely at odds with the supposedly practical aim of using a mask—reveals how the significance held by a scientific instrument can become distorted through its popular usage. The psychological effects of creating a barrier between the wearer of the mask and the outside world has transcended the mask’s original raison d’être. Its aficionados have discovered that, not only is the mask an easy protective measure against hay fever and the flu, it can also shield the wearer from the dagger-like looks shot at any visible symptom. It isn’t difficult to see why some people would choose to use masks to prevent other judgmental glances as well, hiding anything from bad breath and acne to a face without makeup. In any case, as Horii writes, “[the mask] absorbs a sense of vulnerability provoked by the threat or uncertainties of risks.”2

As the term “risk ritual” suggests, the surgical mask has been demoted from its former seat of scientific authority. While those introduced to the mask during the Spanish flu may have thought it a revolutionary precaution, in our bio-technical age, the mask can seem slightly outdated. This change in sentiment is most evident in the temporary disappearance of medical masks in the 1970s, when the “more reliable” flu vaccine came to the fore. According to Horii, it was only once flu vaccinations saw a decline in popularity in the late 1980s that the mask, no longer upstaged, was recast as the last line of defense against pathogens.3 Now, more than two decades later, all signs point to the mask retaining its position as an indispensable cultural instrument, entangled as it is with various notions of self-care.

In Western countries formerly dismissive of the use of masks in non-medical environments, a similar shift in public perception can be seen. Even as official advice on mask usage continues to differ, the demand for masks among private buyers has skyrocketed around the world. Even those without masks are often seen attempting to mimic their function by using shirt-collars, sleeves, or handkerchiefs to cover their mouths upon noticing a stranger within a 1.5-meter radius. This, combined with the clear divide in mask use by age group, leads me to think that, despite the consensus that informal face masks are better at preventing the infection of those exposed to the mask wearer rather than the other way around, those who do wear them are doing so as a means of personal protection.

This observation is, at least in the case of the Japanese, corroborated by the results of this survey by Japanese pharmaceutical company Eisai. Of its 310 respondents, 97.1 percent believe that masks are capable of protecting their wearers from the flu and other illnesses. More worryingly, the same survey finds that 73 percent of them have habits, such as touching the filter or pulling it down to their chins, that could essentially nullify the protective properties of the mask.

These findings show that, although many people idealize Japanese mask culture as a shining example of pandemic-preparedness, there are major pitfalls to the risk ritualization of mask use. By creating a non-specific and unscientific dependence on masks as a barrier between the body and invisible threats, the mask as risk ritual can lull its wearer into a false sense of security, as long as it is the symbolic significance of the mask, rather than its correct usage, that people find comfort in. This may be fairly benign under normal circumstances, but COVID-19 is no normal circumstance—to both the wearer and those nearby, such a false sense of comfort has the potential to spell the difference between life and death.

But crises have a way of shifting the status quo, if only temporarily. In a pandemic, the mask wearer can agitate rather than reassure those nearby. Given a highly transmittable pathogen like COVID-19, the thinly-masked dimension of fear is stripped to its core, leaving the question in full view: What’s that person hiding beneath their mask, and should I be afraid? This widespread uncertainty has caused some mask wearers in Japan to adopt a new communicative tool in their risk ritual: these message cards can be sewn into a cloth mask to relay the reason for its use. These “statement pieces” are straightforward: one reads, “to prevent hay fever,” and another, “I have asthma.”

This is a stunning reversal of the usual norm, where the mask wearer seeks to hide all manner of ailments behind a standard signal of personal responsibility. Whether or not the cards will “go viral” is beside the point—their existence is enough to show that, even for the Japanese, mid-pandemic mask use is far from business as usual.

Unfortunately, the Japanese government seems to have missed the memo. On April 1, the Japanese public was left wondering whether Prime Minister Shinzo Abe actually meant his announcement—that the government plans to distribute two cloth masks per household—as some sick April Fool’s joke. Besides the obvious factors—the belatedness of response, the lack of any other notable measures—it appears to be the materiality of the mask itself that is to blame for the backlash. For the government to cling to such measures of last resort provides little reassurance to anyone. It doesn’t help that this meager plan will cost roughly 46.6 billion yen ($424 million) to implement. To even the most mask-loving Japanese, many of whom have the means to make two masks of their own, this is an insulting waste of money.

Japan isn’t the only country responding poorly to the pandemic. Especially in its earlier days, the policies of many countries left something to be desired. Even well-meaning governments must resort to experimentative policy-making in order to navigate uncharted territory. As a result, citizens are made wary and weary by the never-ending uncertainties and, like these protestors in Brazil, many have openly voiced their concerns. I wouldn’t be surprised if, post-COVID-19, a new “risk ritual” of mask wearing expands its domain overseas. This new ritual may continue to lack scientific vigor and remain subject to interpretation, but regardless of fact or individual belief, it will be our collective uncertainty that shapes our behavior. Every masked face will serve as a reminder: it is up to us to keep ourselves safe.

About the author: Jadie Hokuala Iijima Geil is a bachelor student of the School of International Liberal Studies at Waseda University, currently studying abroad at the Free University of Berlin. A self-identifying hermit since long before social distancing rules came into place, she has settled perhaps a little too comfortably into home-office research assistantship at the Max Planck Institute for the History of Science. On the odd occasion that she does go out, she can’t help but notice the cultural curiosities of the cities she’s lived in—Honolulu, Tokyo, Berlin—and she returns home inspired to begin her next obsessive research project.

2 Horii, “Why Do the Japanese Wear Masks?”

3 Horii, “Why Do the Japanese Wear Masks?”

Image credit: Photo by taken by the author.