The transformation. A short history of masks / by Jan Henning 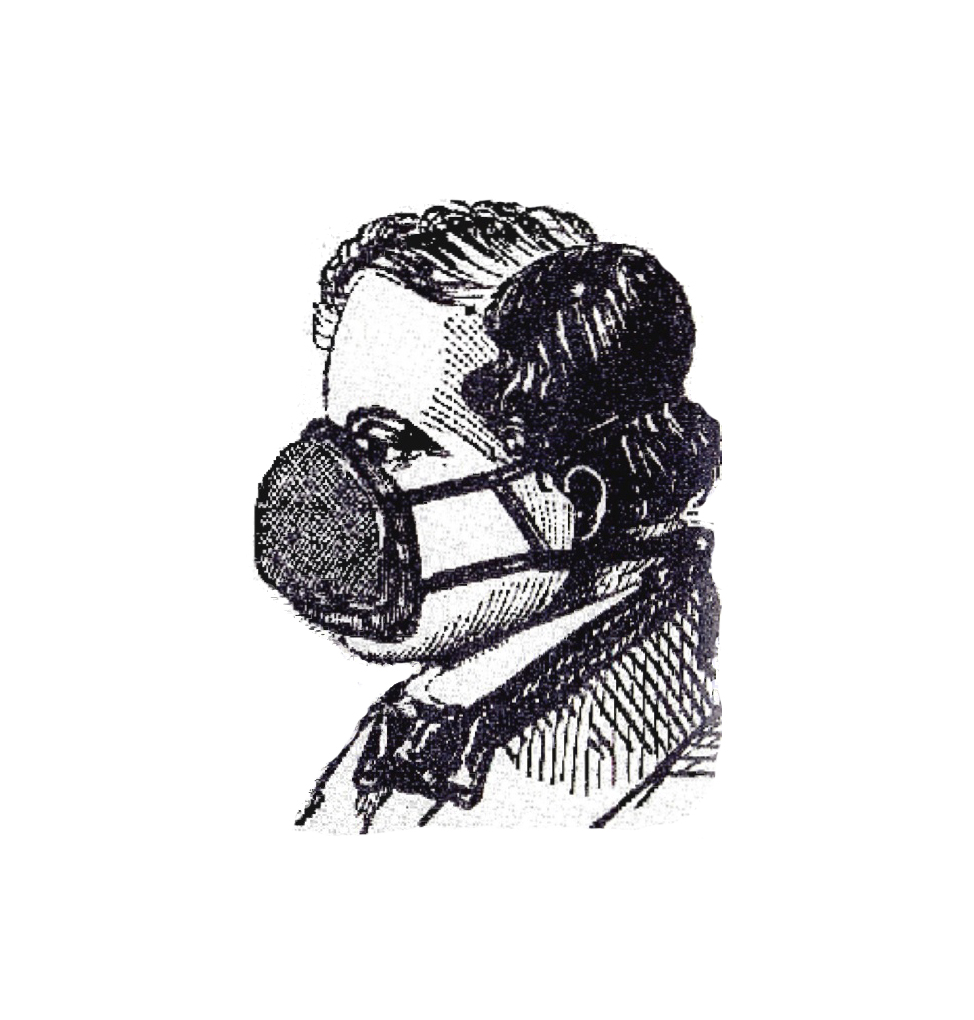 In 2020, masks are everywhere. Images of healthcare workers wearing surgical respirators are all over the media. Shoppers encounter masked cashiers in supermarkets. In Germany and Austria, grocery buyers are obligated to wear “homemade” masks themselves. Worldwide, governments and hospitals are racing to stock up on reliable protective gear. The Trump administration went so far as to request 3M—one of the main producers of N95 masks—to cease exporting US-manufactured masks to Canada and Latin America in April.1 The N95 respirator—highly sought-after because of its efficiency in filtering viruses in droplets and aerosols—may well become the symbol of the COVID-19 pandemic. Masking has become a contemporary phenomenon. One is inclined to think that masks have never acquired such a cultural meaning before.

Masks were, however, some of the earliest human artefacts. One of the oldest recorded cave paintings, for instance, depicts a man wearing a deer mask. Likewise, death and funeral masks can be traced back to Ancient Egypt (as early as the fourteenth century B.C.) and were also used in the rituals of Germanic tribes. Moreover, theater masks were central to Ancient Roman and Greek plays. While theater masks lost much of their importance throughout the early medieval ages, masks did not disappear. The image motif of using a mask to scare others appears in various artworks of the last two thousand years. More recent and well-known examples of masks are the Venetian carnival masks that gained popularity during the seventeenth century. Indeed, masks have been important cultural products throughout most of human history.2

All masks share the idea of transformation.3 Death masks, for instance, facilitated the deceased’s smooth transition into the afterlife. Theater masks, in the spectators’ eyes, transformed the actors’ actions into those of the figures their masks portrayed. Thereby, they helped the characters come to life. Beak masks, which were used by a small fraction of plague doctors in seventeenth-century Europe and were stuffed with aromatic substances such as myrrh and mint, transformed foul smells into fresh scents. (Note: these doctors did not have a concept of bacteria but believed that miasmata, foul substances from the earth, caused disease.) The N95 mask’s function and symbolism also draws from the notion of transformation. It transforms “bad air” into “good air.” The N95 mask allows a vulnerable being to work in contagious environments such as the COVID-19 assessment centers. In addition, for many of my friends, wearing a mask transforms them into a responsible citizen who respects other people’s health.

The transformative meaning of masks is closely related to their protective function. Theater masks, for instance, shielded an actor’s face from the viewer’s eyes. Grimm’s historical dictionary reminds us of the protective use of masks in a more literal sense. One use of the German word Maske in the sixteenth century described a weather guard for the face.4 Similarly, military helmets can be considered masks. A late variation here is a bulletproof mask from the 1980s which—drawing from Philip Zimbardo’s psychological studies—intensified the deindividuation of soldiers into machines of war (see Fig. 1). 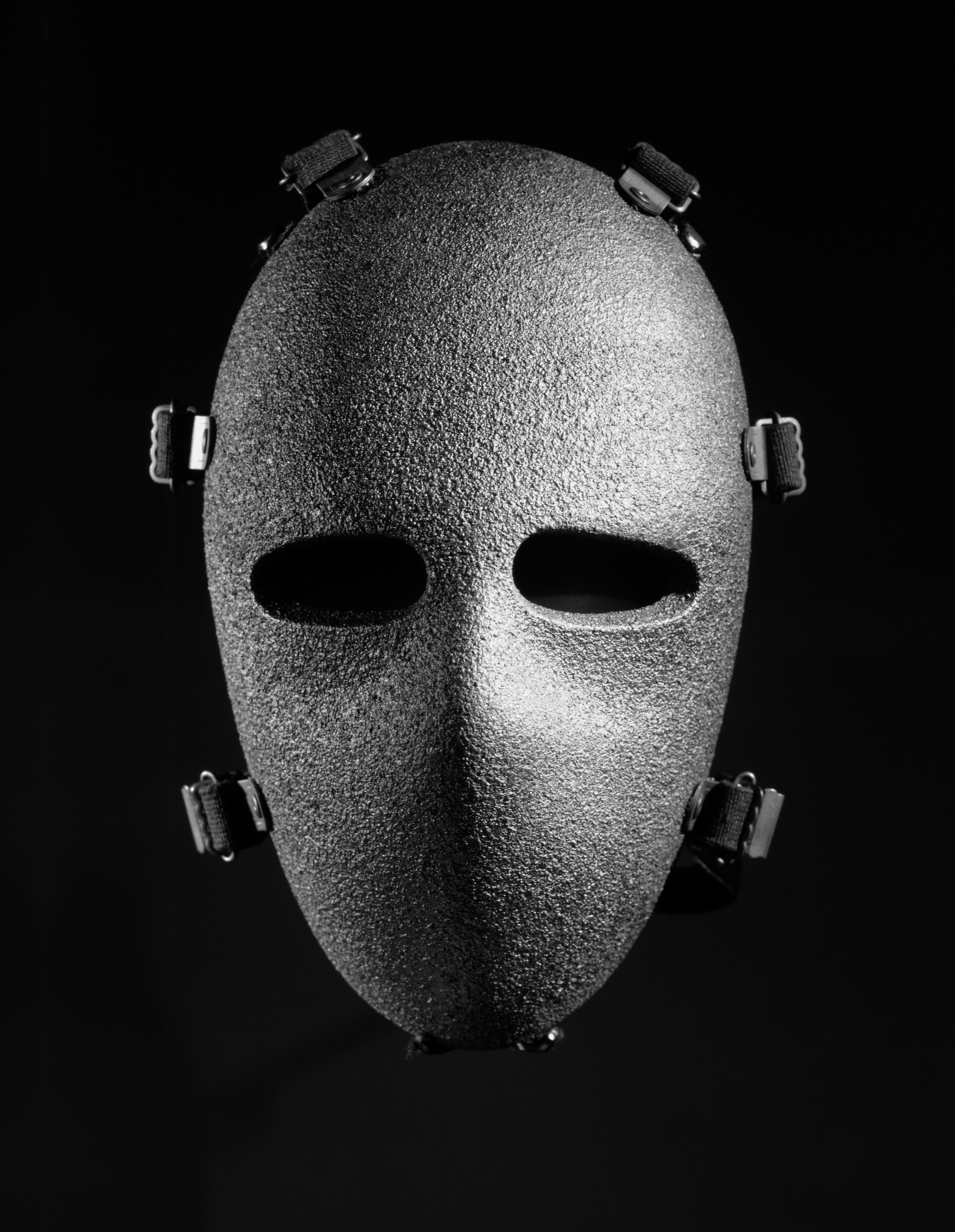 Some early military masks resembled today’s medical masks. At the beginning of the sixteenth century, Leonardo Da Vinci pictured sailors “hav[ing] [their] nose and mouth covered over with a fine cloth dipped in water so that”5 they would not be harmed by the toxic weapon he had invented. During the First World War, British soldiers initially used simple cloth masks to protect themselves from German chlorine gas attacks. Besides their application in times of war, masks were also developed to serve the purpose of firefighters, miners, and industrial workers. Particularly the second half of the nineteenth century saw the invention of numerous masks, ranging from small charcoal masks to clunky respirators worn on the back (see Fig. 1 and 2).6 These inventions should, however, not obscure the point that many of these devices served techno-positivist fantasies, such as the utopia of healthy industry, rather than day-to-day work. Most firefighters and miners would never have encountered such a device. In British coal mines, for instance, miners were rarely equipped with effective masks until well into the 1970s.7 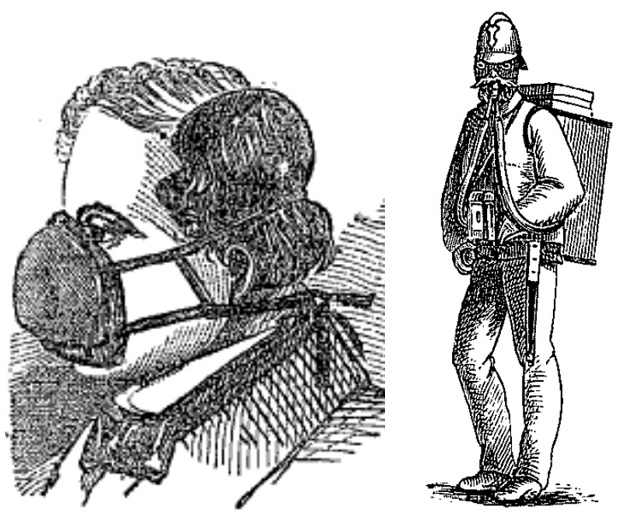 Tracing the history of masks in mining demonstrates how perceptions of risk and safety changed over time. In mining, acceptable risks were negotiated between workers, doctors, politics, and industry. In Britain and the U.S., the acknowledgement of occupational diseases such as pneumoconiosis was gravely delayed by attempts to balance the needs of industry and the health of workers. Ultimately, the agency of miners themselves and progressive doctors motivated the creation of safety acts and the obligation to provide respirators in the 1960s and 1970s. Similarly, growing concerns about legal liability preceded the increasing provision of single use respirators.8

Current FFP and N95 standards are the results of “a series of societal agreements about what is safe enough.”9 While the company 3M began experimenting with polymer masks in the 1960s and 1970s, their early products were what one would now call dust masks. They only filtered larger particles. Today, industries have varying requirements towards certified respirators which, in some instances, even filter gases. In the U.S., the National Institute for Occupational Safety and Health has regulated the classification of respirators since the 1970s. It approved the medical use of N95 masks during the 1990s tuberculosis crisis, as these respirators were rated to filter at least 95% of airborne particles.10

From a historical perspective, the development of the “N95 standard” during a resurgence of tuberculosis in the 1990s reminds us of another transformation. For most of the nineteenth century, tuberculosis in the U.S. was considered a hereditary, rather than a contagious disease. Those who suffered from tuberculosis lived a more active lifestyle and were closely cared for by family members, compared to in later years, when many were isolated in sanatoria and asylums. Indeed, towards the end of the century, the gradual acceptance of germ theory and the growth of public health authorities – mixed with racial and social prejudice at the time – led to a public response of fear, isolation, and blame that was prevalent until well into the twentieth century.11 There is no reason to romanticize tuberculosis regimes of the nineteenth century. Nonetheless, this transformation holds a crucial lesson for the current crisis.

Our knowledge of the contagiousness and severity of COVID-19—a viral disease—must not divide us. For many of us, sidewalks have transformed into risky spaces. Physical encounters with strangers are laden with fear. The accusations and attacks against Asian-Americans in the U.S. today resemble early twentieth-century depictions of Chinese-American communities as a source of contagion. While considerate public health measures are crucial, it is up to us to discuss how we want to survive a global pandemic. Compassion and care, not fear and blame, should be the reasons why we wear our masks.

About the author: Jan Henning is a historian of technology and medicine at the University of Toronto. He studies the history of risk and disaster. In his work, he argues that the technologies employed by emergency services materialized the values that guide society’s response to risk. Jan joined The Mask-Arrayed because the project demonstrates the deep meaning of seemingly mundane “things.”

1 Leyland Cecco and Julian Borger, “Trump and 3M Reach Deal to Allow N95 Face Masks to Be Exported to Canada,” The Guardian, April 7, 2020.